With respect to the characteristics of effective teams, they typically:

Teams typically spend a lot of time on planning, linking team goals to the Department and/or the organisations vision and plan. Good teams also meet regularly to discuss progress, and also take time out to reflect on their processes, and how they inter connect as people.Team values can effectively provide a team’s minimum standard of acceptable behaviour and performance on the job.

All teams should strive to have established values that are consistent with the core values of the organization. These defined standards can become the foundation for the team’s overall success and the focal point for daily behaviour. The challenge is coming up with a set of values that are more than “motherhood and apple pie” that the team really buy into. Typical values like the ability to learn, encouraging initiative, integrity, mutual respect, open communication, and fun for example need the values defining in terms of what they mean in practice.

1.  Someone on the leadership team suggested it would be a good idea to identify our values. The regular agenda for the leadership team meetings was already jam-packed, and no one had time for an extra meeting to do this work, so the task was assigned to a few volunteers to bring back to the team.

The pitfall:  seeing values as separate from the real work. The leaders delegated and disengaged. By taking the time as a team to discuss what values they believed were critical to their future, they would have discovered how these values drive the very behaviors they need to accomplish the work.

2.  The sub-group members understood it was not a good idea to do the work in isolation, so in an effort to be inclusive, they sent out a survey to the everyone in the organisation.

The pitfall: lack of conversation. It is only through involvement and dialogue that values becomes more than words on paper – where people clearly understand them and become commited to living them.

3.  The survey instructions asked people to list their top five values. (The mission statement was not attached). 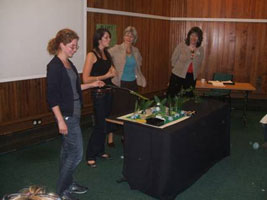 The pitfall: failure to connect values with purpose or vision.  Organizational values need to be more than a reflection of the collective personal values of its members. Because values guide behavior and decision-making, it is important to choose the values that are needed to guide the organization into the future. Simply identifying the values that currently exist describes where you are, but these are not necessarily the values needed to help you get where you want to do.

4.  The sub-group had a lively and energizing meeting in which they reviewed the survey results and shared their own views on what values were important. They selected five values: honesty, relationships, teamwork, profitability, and passion.

The pitfall:  failure to be descriptive. Words mean different things to different people. It is important to provide a clear definition and examples of what the behaviors look like for each of these words.

5.  At the next leadership team meeting, the sub-group presented their results. They were congratulated on their work and thanked for their efforts. The leaders believed the task had been accomplished, and there was no further discussion on the subject. The values were published and listed on the website. Today, nothing is different as a result of this activity; and if you ask leaders what the values are, they would need to look them up.

The pitfall:  lack of accountability.  No processes were set up to monitor whether the values were being modeled by leaders or lived throughout the organization, to help resolve values conflicts, or to provide consequences for serious violations. Without accountability, the effort of identifying values becomes simply an activity to check off a list, rather than a guiding force in your organisation.

The practicalities of creating Team values

Here is a step by step practical exercise to working with a team to create a set of Team values.