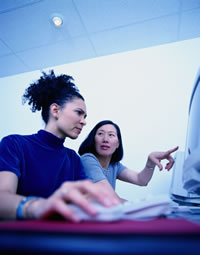 Line managers are increasingly expected to coach staff and can have a powerful influence on their teams and the organisation as a whole when they adopt a coaching style of management.
As a way of managing people, coaching differs from the traditional corporate ‘command and control’ approach in the following ways:

This is not simply a case of ‘being nicer’ to people – delegated responsibility brings pressure to perform and coaching Managers maintain a rigorous focus on goals and results.

Simply put, coaching means asking questions, not simply to gather facts but to elicit solutions, feelings, ideas and new thoughts from the person being coached. If the objective is to develop employees, asking them questions challenges them to think harder and more broadly about issues, thereby enlarging their perspective and improving their reasoning skills. When the need is to make decisions, the same coaching skills can generate better solutions. The skill of coaching is in being able to ask questions that help people open up, and bring into play a wider circle of ideas and expertise.

Some people argue that it is impossible for a Manager to act as a coach, given her position of authority over her team. While authority is an important issue, it need not be an insurmountable obstacle – as long as there is genuine trust and respect in the working relationship. It is also a fact that coaching frequently takes place between peers and even upwards on occasion, with some enlightened bosses happy to be coached by their team members.

In his book Coaching for Performance John Whitmore raises the issue of managerial responsibility and authority, and asks ‘Can the Manager, therefore, be a coach at all?’:The answer is yes, but it demands the highest qualities of that Manager: empathy, integrity and detachment, as well as a willingness, in most cases, to adopt a fundamentally different approach to his staff: he may even have to cope with initial resistance from some of his staff, suspicious of the motives or perhaps having got used to a “dependency” authoritarian style.

Coaching has consistently come in Chartered Institute of Personnel and Development’s (CIPD) surveys as a key way to motivating and helping individuals and teams to solve issues, improve performance and develop skills and confidence in the workplace.

In a recent survey of over 600 HR specialists and line Managers, people were asked what skills they need to be coaching Managers and what influences coaching management approach.

Mature coaching characteristics are more likely to be achieved by those in more senior positions, who often have more “discretionary time” and are less caught up in the operational challenges that dominate life for line managers.

Coaching by line Managers is associated with levels of manager self-confidence and good Manager/team relationships. At the same time, these factors may encourage Managers to engage more often in coaching behaviours.

Time constraints are the most significant barrier to achieving a coaching style of management, but organisational culture and a lack of confidence to deal with difficult people are also inhibitors.

Clarity in coaching roles and expectations, senior management ownership of coaching as a business issue and top management role-modelling of coaching characteristics are all important ingredients of a coaching culture.

What Coaching Managers do

Managers have many responsibilities; coaching is among the most important. Coaching does not simply correct today’s problem; it helps keep the problem from resurfacing. The employee not only understands the goal, but can teach it to others. Coaching may take longer than correcting, which is a “quick fix,” but it is longer-lasting. It builds a body of understanding, and, if done well, helps build a workplace culture.

How does a Manager shift from a directive approach to Manager as Coach?

1. Managers know their staff. They pay attention to their work and to them as human beings. They never make assumptions about the motives that drive the individuals’s words or actions. They take time to learn the person’s hopes, fears, and history.

2. Managers check their egos at the door. They resist trying to impress staff with their knowledge. Their satisfaction comes not from hearing someone say “how do you know so much?” but in seeing the individual grow his or her skills. When coaching is done well, learners believe they personally have discovered ideas and answers, hence, they may never acknowledge the Managers’s contribution. And that should be just fine with the Manager.

3. Managers ask questions. What did you see out there? What did you like most about the assignment? What’s causing you concern? How would you like to approach the problem? Who else might we want to include? Is there another way to look at this? What would happen if we turned things upside down?

4. Managers listen completely. They resist the temptation to give instant advice or answers, even if they have them at the tip of their tongue. They give the individual time to get a point out fully, and only then work to develop a coaching conversation. They resist phone calls, door knocks, and the errant material lying on top of their desks. When coaching is underway, the most important gift a Manager gives is complete attention.

5. Managers are overall, positive. They emphasize growth and goodness. They catch people doing things right and reward them with praise. Managers are not insincere or flattering; they are genuine and specific in their praise. They give the individual details about what is being praised and why. They do not shy away from honest feedback about things that need strengthening, but even critical feedback is framed in a non-threatening manner.

6. Managers look for “teaching moments.” They are always on the alert for opportunities to reinforce values and skills. These are teaching moments. They may happen in formal meetings or casual conversations; in bringing people together, in calling upon a person to share the “how I did it” of a success story with others, through department-wide memos or personal notes. But when it comes to teaching moments, Managers are careful: they praise in public, and criticise in private.

7. Managers inspire. You may not think of yourself as an inspirational figure, and your humility is laudable. But even the most humble leaders are known for their values. People around them know what they stood for. What do you stand for? It can take courage to be inspirational, to overcome your own fears.People will watch what you do, more than what you say.

8. Managers are responsible risk-takers. They know the rules of the road so well that they don’t fear an occasional detour. They celebrate creativity that respects values but tries things a different way. They reward innovation. They aren’t afraid to laugh at themselves or look foolish to help get an important point across. While helping others grow, they are always challenging themselves to do the same. They do not fear change or challenge. They do not hesitate to say “I’m sorry” when they make mistakes. And even the best do.

What’s in it for Managers?

It’s probably fairly obvious that coaching benefits the people being coached – but what about the Manager? If you are a busy Manager, can you afford the time and effort required, when you already have plenty of other demands to cope with?

Coaching is not a case of ‘giving up’ your time and energy to helping others achieve their goals and solve their problems – it will also benefit you in the following ways:

A more committed team: empowerment is a powerful motivator. When you make a genuine effort to include people in setting their own goals, making decisions and implement their own ideas, they are likely to become more committed and focused at work.

Better team performance: because of its dual functions of managing performance and developing people, coaching leads to better individual and collective performance. The ongoing learning process means that the upward curve can get steeper over time.

Better information: if you are genuinely coaching people in a collaborative, open spirit, people will feel more confident in coming to you with vital information – including telling you the ‘bad news’ while there is still time to do something about it.

Investing time to gain time: there is no doubt that in the short term it’s often quicker to ‘take charge’ and give orders instead of coaching. That’s fine for ‘fire fighting’, but in the long term, the more you direct, the more people will rely on you for directions, and the more of your time will be swallowed up by it. If you invest time in coaching however, over time your people will require less and less direction, and you will be confident in delegating more and more to them – freeing up your time for the tasks only you can accomplish.

Suppose someone comes to you with a story of something that’s gone wrong. As a good Manager/coach, there are three useful things to do at this point:

LISTEN to the story – get the details, express concern, show how important it is by giving excellent attention.

AFFIRM the bringer of the bad news – let them know how important it is that they raised this issue, what you’re impressed by about them, their speed of action, concern for customers, etc.

Some good questions that can help here include:

• “What do you want to have happen next time?”

• “What would be better than that, for everyone?”

The individual may not have thought about this, being focused on what’s wrong. They may fall silent for a moment. Let them. Give them plenty of time to think about it. As always, a period of silence here is a good sign for the Manager Coach; there is thinking going on.

Expand the answer by asking, “What else?” to get more detail. Then ask about others’ perspectives on what would be preferable.

Managing in a coaching style is ultimately about benefits to the team, the individual team, members and the Manager, and could even be seen as enlightened self interest as an approach.

Its important to say that this style of management isn’t the only one, and the principle of “situational leadership” an important caveat; there will be times as a Manager to be directive.There is good evidence though, that using a predominantly coaching style brings medium-long term benefits to all concerned.

As always, the approach sits best in an enlightened organisational context, where Senior Managers fundamentally believe in the approach, and where there is a learning culture of training for Managers, along with a recognition of the importance of the key HR practices of supervision, appraisal and regular team communication.

Leadership Styles Questionnaire 2013 looks at your leadership style in the context of 4 different styles, and reflect on what situations you might need to flex that style dependent on the person and the context.

If you want to go one step further and gain feedback on what your Team thinks of your leadership style, plus a simple feedback “start,stop,continue” exercise download the Leaderships Styles Informal 360 review exercise.