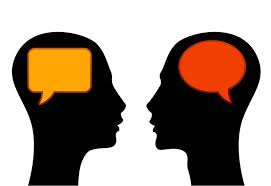 In Coaching practice, it’s helpful to understand when working with clients going through change, some of the principles around behavioural and social science theories and models. Of course, from a lifelong learning perspective it’s also important in our own lives too! This article looks at a number of behavioural and social science theories; the examples used to illustrate typically have a health bias, as the theories are often used in changing aspects of health in individuals and groups.

As a pre-emptor to going through change, it’s worth asking clients the following questions:

• What is the compelling need to do things differently?
• What are the things that are driving this?
• From a scaling approach, how much do I want to change (1-10)?

Finally, its important also to ask clients what the implications are of not making the change.

One of the strongest challenges to making any behaviour change, whichever model you consider, is the “recidivism/relapse” aspect; most mature models integrate a level of relapse: this is often a time when people give up, and the challenge as a coach is to recognise this possibility, the potential trigger points for this and to think laterally what may encourage clients to consider approaches to handle this. 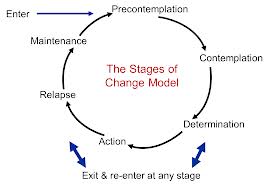 In this model known as both Transtheoretical and stages of change, behaviour change has been conceptualised as a five-stage process or continuum related to a person’s readiness to change: precontemplation, contemplation, preparation, action, and maintenance. It’s drawn from several other theories based in health psychology; hence its name. People are thought to progress through these stages at varying rates, often moving back and forth along the continuum a number of times before attaining the goal of maintenance. Therefore, the stages of change are better described as spiralling or cyclical rather than linear.
In this model, people use different processes of change as they move from one stage of change to another. According to this theory, tailoring interventions to match a person’s readiness or stage of change is essential. For example, for people who are not yet contemplating becoming more active, encouraging a step-by-step movement along the continuum of change may be more effective than encouraging them to move directly into action.

As with all the theories of behaviour change, the theory has its fans and detractors. There may be many “false dawns” of repeated failure or stalling, especially without planned support and intervention. It’s also worth reflecting on the wider context the individual or Team is working in; there may be overwhelming external social, financial, or cultural factors that override the ability and desire to change 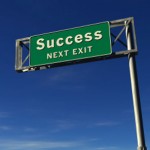 Goal setting theory originated from Locke’s pioneering research on goal setting and motivation in the late 1960s. Goal setting involves establishing specific, measurable and time-targeted objectives (the classic “SMART” acronym that has become so well used). Goal setting features as a major component of personal development literature and business language. Locke examined the behavioural effects of goal-setting, concluding that 90% of laboratory and field studies involving specific and challenging goals led to higher performance than did easy or no goals. To elicit some specific form of behaviour from others, it is important that this person has a clear view of what is expected from him/her.

The possible down sides with goal setting is the assumption of the principle that people know what their goals are! As with the Whitmore “GROW” model, part of Coaching work often involves people setting out the complexity of their own reality before they start to work towards clear goals. It can be seen as literal and a bit linear, not factoring in deeper psychological aspects. 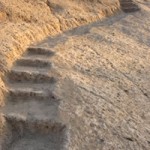 Learning theories emphasize that learning a new, complex pattern of behaviour, like changing from a sedentary to an active lifestyle, normally requires modifying many of the small behaviours that compose an overall complex behaviour. Principles of behaviour modification suggest that a complex-pattern behaviour, such as walking continuously for 30 minutes daily, can be learned by first breaking it (down into smaller segments (e.g., walking for 10) minutes daily).

Behaviours that are steps toward a final goal need to be reinforced and established first, with rewards given for partial accomplishment if necessary. Incremental increases, such as adding 5 minutes to the daily walking each week, are then made as the complex pattern of behaviour is “shaped” toward the targeted goal. A further complication to the change process is that new patterns of physical activity behaviour must replace or compete with former patterns of inactive behaviours that are often satisfying (e.g., watching television), habitual behaviours e.g., parking close to the door), or behaviours cued by the environment (e.g., the presence of an elevator).

Reinforcement describes the consequences that motivate individuals either to continue or discontinue behaviour. Most behaviour, including physical activity, is learned and maintained under fairly complex schedules of reinforcement and anticipated future rewards. Future rewards or incentives may include physical consequences (e.g., looking better), extrinsic rewards (e.g., receiving praise and encouragement from others, receiving a T-shirt), and intrinsic rewards (e.g., experiencing a feeling of accomplishment or gratification from attaining a personal mile stone). It is important to note that although providing praise, encouragement, and other extrinsic rewards may help people adopt positive lifestyle behaviours, such external reinforcement may not be reliable for sustained long-term change.

Social learning theory, later renamed social cognitive theory, proposes that behaviour change is affected by environmental influences, personal factors, and attributes of the behaviour itself. Each may affect or be affected by either of the other two.
A central tenet of social cognitive theory is the concept of self-efficacy. A person must believe in his or her capability to perform the behaviour (i.e., the person must possess self-efficacy: the measure of one’s own ability to complete tasks and reach goals ) and must perceive an incentive to do so (i.e., the person’s positive expectations from performing the behaviour must outweigh the negative expectations). Additionally, a person must value the outcomes or consequences that he or she believes will occur as a result of performing a specific behaviour or action. 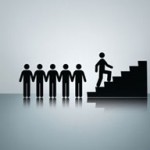 Outcomes may be classified as having immediate benefits (e.g., feeling energized following physical activity) or long-term benefits (e.g., experiencing improvements in cardiovascular health as a result of physical activity). But because these expected out-comes are filtered through a person’s expectations or perceptions of being able to perform the behaviour in the first place, self-efficacy is believed to be the single most important characteristic that determines a person’s behaviour change.
Self-efficacy can be increased in several ways, among them by providing clear instructions, providing the opportunity for skill development or training, and modelling the desired behaviour. To be effective, models must evoke trust, admiration, and respect from the observer; models must not, however, appear to represent a level of behaviour that the observer is unable to visualize attaining.

A criticism of most theories and models of behaviour change is that they emphasise individual behaviour change process and pay little attention to sociocultural and physical environmental influences on behaviour. Recently, interest has developed in ecological approaches to increasing participation in physical activity. 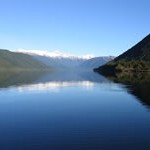 These approaches place the creation of supportive environments on a par with the development of personal skills and the reorientation of the context in which the individual is working. In a health context, the concept of a health-promoting environment has been demonstrated by describing how physical activity could be promoted by establishing environmental supports, such as bike paths, parks, and incentives to encourage walking or cycling to work. In a business setting this might be about the concept of a learning organisation, where multiple approaches to learning are used: e.g. in house coaching schemes, different and varied approaches to training and learning including face to face and online, the provision of enough time for reflective learning etc.
An underlying theme of ecological perspectives is that the most effective interventions occur on multiple levels. A model has been proposed that encompasses several levels of influences on health behaviours: intrapersonal factors, interpersonal and group factors, institutional factors, community factors, and public policy.

Some similarities can be noted among the behavioural and social science theories and models used to understand and enhance behaviour change. Many of the theoretical approaches highlight the role of the perceived outcomes of behaviour, although different terms are used for this construct, including perceived benefits and barriers and outcome expectations.

Ultimately, perhaps its being aware from a coaching perspective of both the desire and resourcefulness of the individual to change, as well as the wider context in which they are working, and the potential limitations that may have to supporting change. It’s probably no surprise that a substantial number of people undergoing coaching come to the conclusion that they need to change the context they are in, as well as their approach and attitude.