“Who Moved My Cheese” As A Discussion Paper 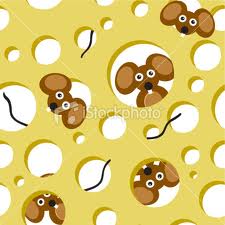 The book is about two mice and two little people (beings that were as small as mice but looked like people) who are looking for cheese. The cheese is a metaphor for what we want to have in life (a job, power status, relationships). The maze is a metaphor for where you spend your time looking for what you want (within the organisation, outside it, in the community, at home etc).

Friends meet up the morning after a school reunion and want to know more about what’s happening in people’s lives. For many of them life turned out differently than they expected when they were at school. Most are struggling to cope with change

a) Which character are you? What will you do differently?

c) How will this change the way you manage change in future?

• Success can breed complacency and even arrogance. Those who are unwilling to take calculated risks/move with the times loose the cheese

• Burying your head in the sand- focussing on the way we have always done it is a recipe for disaster!

• Scan the environment and read the runes

• Its good to evaluate and analyse- (sometimes disastrous mistakes are made because people don’t do enough of this) but don’t suffer from analysis paralysis- the early bird gets the worm!

• How often do we analyse our own response to change as well as those we manage?

• Being flexible, agile and responsive is key to survival-keep your running shoes at the ready

• Our view of life and future possibilities can be unhelpfully constrained by our past experience. This can mean we chase our tails doing what we’ve done-being active rather than productive

• Persuade people your intended approach will deliver the outcomes, is sound

• Moving desks roles territory affects peoples deeper structures- the emotional effect should not be underestimated. Often people may complain about other things- when this is at the root of it

• Play to strengths- know which roles are being played

• Play to strengths- give people a role in change- sniffs can sniff out the markets and competition, scurries like to get things done and like taking the vision forward. Hems are the anchors that slow us down- too set in their ways or uncomfortable to change- however if we sell how change will benefit them eventually they will sign up

• With people, status and recognition, the need to fulfil what they are capable of