Whatever kinds of groups we are in, they are an important part of our lives: in some ways primal to our existence. The majority of my work with organisational development practice involves working with groups or teams through activities such as Away Days, Action Learning sets, and workshops.

Because of the work I do with groups, I wanted the opportunity to reflect on a deeper understanding of the group process, and undertook a foundation course in group analysis in 2011 looking at group analysis principles, and how they relate to wider theories such as attachment theory and personality disorder.

Group Analysis approaches and working with groups in organisations

At first sight, approaches to working with people in a group analysis context and working with groups in organisations are significantly different. Group analysis involves very detailed planning of the group involving areas such as who is to be part of the group, whether the work is time bound or not, and setting psychological boundaries early on and during the course of the group. During the group process the work primarily reflects on what’s happening in the group on a non agenda basis, and involves aspects of the unconscious, transference and reflections of the interaction of group members, facilitated by a trained group analyst. People often bring the narrative of their life outside with all the anxieties and issues therein, but this is leavened by discovering who they are within the analytic group, and how they come across to others. 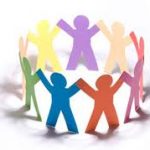 The work I do with groups ranges from short “Away Day” work to longer term Action Learning sets and Leadership workshops. From my personal perspective, the approaches increasingly involve an element of learning, along with some reflective practice about how people come across to others, and getting others to reflect back on them. They have become less agenda orientated and more discovery based over the last few years, especially where the client organisation is happy to go in this direction.For example, in the last 2 years I have been running Coaching Learning sets to provide ongoing professional development for in house Coaches in a large public sector organisation on a quarterly basis. These have developed over time to include:

At the outset of a group analytic approach, people are interviewed for suitability, and a number of factors taken into account as to whether they will suit being part of the group. In a work setting, people are often in groups and teams not of their choosing. When I’m working with a team on an away day, I sometimes don’t get to meet the individual team members before the day itself. Increasingly I am challenging this practice, and see the preparation for an away day as including “pre-contracting” with each of the individuals to understand their motivation, and what they are able to bring and want from the day. I am also becoming increasingly careful about the pressure of single days to cure all the ills of the team! My distinct preference is to contract with a team to engage with people before the day, run the day itself, and then at least have some kind of reflective element 3-4 months down the line to see what’s changed, and what has been learnt.

During the course of a group analytic session, the material is what each of the members brings to the group from their own experience of the outside world or the dynamics within the group, and no one ever really knows what is going to unfold each time. Working with teams in organisations tends to be a much more structured approach, with an agenda, timings, session objectives and outcomes. It has also helped the development of a vast industry around presentation skills, PowerPoint presentations and the like! My practice has developed from being a Trainer to being a Facilitator that allows unstructured elements of a session to unfold and recognises the ability to “go with the flow” of a discussion, rather than worry too much that the time for that particular activity has been used up, and we have to move on. In the old cliché, it is moving from the “sage on the stage, to the guide by the side”.

It’s interesting too that in the field of personal development in the workplace, that there is still a major industry out there that promotes very successfully the idea of confidence learnt in a day, all time management ills sorted out in half a day. However, I think there has been major growth in the use of psychotherapeutic tools and techniques in areas such as group work and coaching practice recognising that behaviour change happens over a period of time, and needs to engage the person to draw out their specific needs and challenges, rather than a sheep dip with prescribed timetables and persuasive training. In Coaching, models from the world of Cognitive Behaviour therapy are used widely; some Coaches quote Carl Rogers (a guru of Counselling) unconditional positive regard in their work, and there are coaching tools that borrow from the principles of Transactional Analysis and Gestalt.

The subject of “endings” is a crucial one in Group Analysis, and most therapeutic groups look in detail about how they manage endings. This reflects the importance of both our attachment to others in the first instance, but the ability to separate and “unglue” from the group. I think that there is an element of this in my work with groups, even when I have only met them for a day. If you are able to gain trust and get people even to partially open up, it’s important to reflect on what they take away in the development of their own practice after the session. What I like about the immediacy of short term interventions like Away Days, is that there is invariably a “call to arms” to both individuals and the team at the end of the session; all the interventions I work on require the team to take away an Action plan, and individuals to take away a set of personal tasks that often include elements such as tempering their approach to others in the team, and being more open to deal with issues with others they struggle with.

I have learnt a good deal by the exposure to the principles of Group analysis, and overall I think it has helped me to reflect on the depth of the work that I do with groups. My practice working with work teams has developed to include a stronger psychotherapeutic dimension, and my belief is that most people are prepared to take risks to learn; when they don’t want to take those risks and uncover what’s happening for them in a team environment, that has to be respected, but it makes it harder to generate real transformation when the critical mass of people want to take little or any risk. The approach of asking people to go to a deeper level in a shorter period of time requires building trust and an emotional literacy that by opening up elements of themselves to scrutiny, they will learn from the process.

There is less distinction in today’s world between the commercial approaches to working with groups in Away Days, Learning sets, and the reflective world of group analysis, something to be welcomed and embraced. There is also some learning that both approaches could take from each other, and it’s a privilege to be able to able to integrate elements of practice from each.