Why we need introverts

I came across this article in the online Guardian based on a book by Susan Cain, and think it makes some really interesting points. For me, there is some difference between how I am at work and at home (much more extroverted at work), but probably most naturally what I would define as a “gregarious introvert”.

Our lives are shaped as profoundly by personality as by gender or race. And the single most important aspect of personality – the “north and south of temperament”, as the scientist JD Higley puts it – is where we fall on the introvert-extrovert spectrum. Our place on this continuum influences our choice of friends and mates, and how we make conversation, resolve differences, and show love. It affects the careers we choose and whether or not we succeed at them. It governs how likely we are to exercise (a habit found in extroverts), commit adultery (extroverts), function well without sleep (introverts), learn from our mistakes (introverts), place big bets in the stock market (extroverts), delay gratification (introverts), be a good leader (depends on the type of leadership called for), and ask “what if” (introverts). 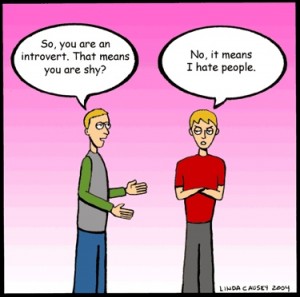 It’s reflected in our brain pathways, neurotransmitters, and remote corners of our nervous systems. Today introversion and extroversion are two of the most exhaustively researched subjects in personality psychology, arousing the curiosity of hundreds of scientists.

These researchers have made exciting discoveries aided by the latest technology, but they’re part of a long and storied tradition. Poets and philosophers have been thinking about introverts and extroverts since the dawn of recorded time. Both personality types appear in the Bible and in the writings of Greek and Roman physicians, and some evolutionary psychologists say that the history of these types reaches back even farther than that: the animal kingdom also boasts “introverts” and “extroverts”, from fruit flies to pumpkinseed fish to rhesus monkeys. As with other complementary pairings – masculinity and femininity, East and West, liberal and conservative – humanity would be unrecognizable, and vastly diminished, without both personality styles.

Take the partnership of Rosa Parks and Martin Luther King Jr: a formidable orator refusing to give up his seat on a segregated bus wouldn’t have had the same effect as a modest woman who would clearly prefer to keep silent but for the exigencies of the situation. And Parks didn’t have the stuff to thrill a crowd if she had tried to stand up and announce that she had a dream. But with King’s help, she didn’t have to.

Yet today we make room for a remarkably narrow range of personality styles. We’re told that to be great is to be bold, to be happy is to be sociable. Closet introverts pass undetected on playgrounds and in corporate corridors. Some fool even themselves, until some life event – redundancy, an empty nest, an inheritance that frees them to spend time as they like – jolts them into taking stock of their true natures.

We live with a value system that I call the Extrovert Ideal – the omnipresent belief that the ideal self is gregarious, alpha and comfortable in the spotlight. The archetypal extrovert prefers action to contemplation, risk-taking to heed-taking, certainty to doubt. He or she favours quick decisions, even at the risk of being wrong; works well in teams and socialises in groups. We like to think that we value individuality, but all too often we admire one type of individual – the kind who is comfortable “putting himself out there”. Sure, we allow technologically gifted loners who launch companies in garages to have any personality they please, but they are the exceptions, not the rule, and our tolerance extends mainly to those who get fabulously wealthy or hold the promise of doing so.

Introversion – along with its cousins sensitivity, seriousness, and shyness – is now a second-class personality trait, somewhere between a disappointment and a pathology. Introverts living under the Extrovert Ideal are like women in a man’s world, discounted because of a trait that goes to the core of who they are. Extroversion is an enormously appealing personality style, but we’ve turned it into an oppressive standard to which most of us feel we must conform.

The Extrovert Ideal has been documented in many studies. Talkative people, for example, are rated as smarter, better-looking, more interesting and more desirable as friends. Velocity of speech counts as well as volume: we rank fast talkers as more competent and likable than slow ones. The same dynamics apply in groups, where research shows that the voluble are considered smarter than the reticent – even though there’s zero correlation between the gift of the gab and good ideas. Even the word introvert is stigmatised – one informal study, by psychologist Laurie Helgoe, found that introverts described their own physical appearance in vivid language (“green-blue eyes”, “exotic”, “high cheekbones”), but when asked to describe generic introverts they drew a bland and distasteful picture (“ungainly”, “neutral colours”, “skin problems”).

But we make a grave mistake to embrace the Extrovert Ideal so unthinkingly. Some of our greatest ideas, art, and inventions – from the theory of evolution to Van Gogh’s sunflowers to the personal computer – came from quiet and cerebral people who knew how to tune in to their inner worlds and the treasures to be found there. Without introverts, the world would be devoid of Newton’s theory of gravity, Einstein’s theory of relativity, WB Yeats’s The Second Coming, Chopin’s nocturnes, Proust’s In Search of Lost Time, Peter Pan, Orwell’s Nineteen Eighty-Four, The Cat in the Hat, Charlie Brown, the films of Steven Spielberg, Google (co-founded by introvert Larry Page) and Harry Potter.

As the science journalist Winifred Gallagher writes: “The glory of the disposition that stops to consider stimuli rather than rushing to engage with them is its long association with intellectual and artistic achievement. Neither E=mc2 nor Paradise Lost was dashed off by a party animal.” Even in less obviously introverted occupations, like finance, politics and activism, some of the greatest leaps forward were made by introverts. Al Gore, Warren Buffett, Eleanor Roosevelt and Gandhi achieved what they did not in spite of but because of their introversion. 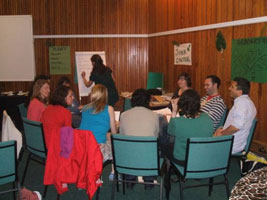 Yet many of the most important institutions of contemporary life are designed for those who enjoy group projects and high levels of stimulation. As children, our classroom desks are increasingly arranged in pods, the better to foster group learning, and research suggests that the vast majority of teachers believe that the ideal student is an extrovert. As adults, many of us work for organisations that insist we work in teams, in offices without walls, for supervisors who value “people skills” above all. To advance our careers, we’re expected to promote ourselves unabashedly. The scientists whose research gets funded often have confident, perhaps overconfident, personalities. The artists whose work adorns the walls of contemporary museums strike impressive poses at gallery openings. The authors whose books get published – once a reclusive breed – are now vetted by publicists to make sure they’re talk-show ready.

If you’re an introvert, you also know that the bias against quiet can cause deep psychic pain. As a child you might have overheard your parents apologise for your shyness. Or at school you might have been prodded to come “out of your shell” – that noxious expression that fails to appreciate that some animals naturally carry shelter everywhere they go, and that some humans are just the same. “All the comments from childhood still ring in my ears, that I was lazy, stupid, slow, boring,” writes a member of an email list called Introvert Retreat. “By the time I was old enough to figure out that I was simply introverted, it was a part of my being, the assumption that there is something inherently wrong with me. I wish I could find that little vestige of doubt and remove it.”

Now that you’re an adult, you might still feel a pang of guilt when you decline a dinner invitation in favour of a good book. Or maybe you like to eat alone in restaurants and could do without the pitying looks from fellow diners. Or you’re told that you’re “in your head too much,” a phrase that’s often deployed against the quiet and cerebral.

Of course, there’s another word for such people: thinkers.

You can be a shy extrovert too…

There are now almost as many definitions of introvert and extrovert as there are personality psychologists. Still, they tend to agree on several important points: for example, that introverts and extroverts differ in the level of outside stimulation that they need to function well. Introverts feel “just right” with less stimulation, as when they sip wine with a close friend, solve a crossword puzzle, or read a book. Extroverts enjoy the extra bang that comes from activities like meeting new people, skiing slippery slopes, and cranking up the stereo.

Many psychologists would also agree that introverts and extroverts work differently. Extroverts tend to tackle assignments quickly. They make fast (sometimes rash) decisions, and are comfortable multitasking and risk- taking. They enjoy “the thrill of the chase” for rewards like money and status. Introverts often work more slowly and deliberately. They like to focus on one task at a time and can have mighty powers of concentration. They’re relatively immune to the lures of wealth and fame.

A few things introverts are not: the word introvert is not a synonym for hermit or misanthrope. Introverts can be these things, but most are perfectly friendly. One of the most humane phrases in the English language – “Only connect!” – was written by the distinctly introverted EM Forster in Howards End, a novel exploring the question of how to achieve “human love at its height”.

Nor are introverts necessarily shy. Shyness is the fear of social disapproval or humiliation, while introversion is a preference for environments that are not overstimulating. Shyness is inherently painful; introversion is not. One reason that people confuse the two concepts is that they sometimes overlap (though psychologists debate to what degree). 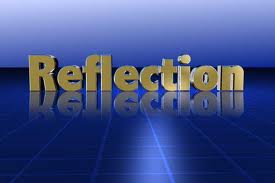 You can be a shy extrovert, like Barbra Streisand, who has a larger-than-life personality and paralysing stage fright; or a non-shy introvert, like Bill Gates, who by all accounts keeps to himself but is unfazed by the opinions of others. You can also, of course, be both shy and an introvert: TS Eliot was a famously private soul who wrote in The Waste Land that he could “show you fear in a handful of dust”. Many shy people turn inward, partly as a refuge from the socialising that causes them such anxiety. And many introverts are shy, partly as a result of receiving the message that there’s something wrong with their preference for reflection, and partly because their physiologies compel them to withdraw from high-stimulation environments.

But for all their differences, shyness and introversion have in common something profound. The mental state of a shy extrovert sitting quietly in a business meeting may be very different from that of a calm introvert – the shy person is afraid to speak up, while the introvert is simply overstimulated – but to the outside world, the two appear to be the same. This can give both types insight into how our reverence for alpha status blinds us to things that are good and smart and wise. For very different reasons, shy and introverted people might choose to spend their days in behind-the-scenes pursuits like inventing, or researching, or holding the hands of the gravely ill – or in leadership positions they execute with quiet competence. These are not alpha roles, but the people who play them are role models all the same.